The Chrysler Sebring II (St-22/JR) is a line of mid-size cars that was sold by Chrysler from 1995 to 2010. 3-generation of Convertibles, 2-generations of Sedans, and 2-generations of coupes were manufactured by Chrysler. However, the maker of the cope is the same as other Sebring models, and also some of its styling cues are similar to sedans, but yet it was mechanically distinct to other Sebring models. Chrysler Sebring Coupe was introduced in 1995 as a replacement for the Chrysler LeBaron Coupe. The convertible was introduced in 1996, replacing LeBaron’s counterpart. Both body styles were redesigned in 2001 and the company created a sedan version by replacing the Chrysler Cirrus. In 2005 the coupe was discontinued and the company did not introduce any replacement model after discontinuing the coupe.

In 2001, Chrysler used the name Sebring on three different cars, the convertible and sedan were Chrysler JR line replacement for the Chrysler Cirrus. The 2004 Chrysler Sebring model had a few drawbacks in the front-end, so they re-worked on headlights, redesigned grille, and winged emblem of Chrysler was placed in the middle on the rear deck. Though the 2004 model got a few changes still the company decided to discontinue the coupe after the 2005 model. In Mexico and other places, the Sebring was sold as the Chrysler Cirrus. The IIHS (Insurance Institute for Highway Safety) gave the 2001-2006 Chrysler Sebring a satisfactory overall rating in frontal crash tests. However, in the side impact test, it got a poor overall rating for no side airbags. As Chrysler refused for another test, the IIHS did not test the side airbags’ safety of the Sebring.

The Sebring Convertible was redesigned in the year 2001, now this model slightly resembles the sedan. Although, it still looks different from the coupe and sedan. For the 2001 model year, a redesigned Sebring Coupe was introduced by the company. Chrysler also manufactured international versions of the 2001-2006 Sebring Convertible and Sedan for the mainland European market.

They were manufactured from 2000 to 2006. Sedan had four doors whereas Convertible had two doors. Both the models used designs from the same base of Chrysler JR. The features are mostly inherited from the previous generation but the body inside had been totally re-modified. Especially the nose like structure at the front had been totally changed.

It was manufactured from 2000 to 2005. It showcased double doors. This car model was redesigned using the Chrysler ST-22 base.

All the variants had a good engine that can give an excellent mileage. Moreover the transmission speed was also type 4 and 5 in case of all three variants – Sedan, Convertible and Coupe. However the sales were not as expected and so the car model was again re-modified for the third time. 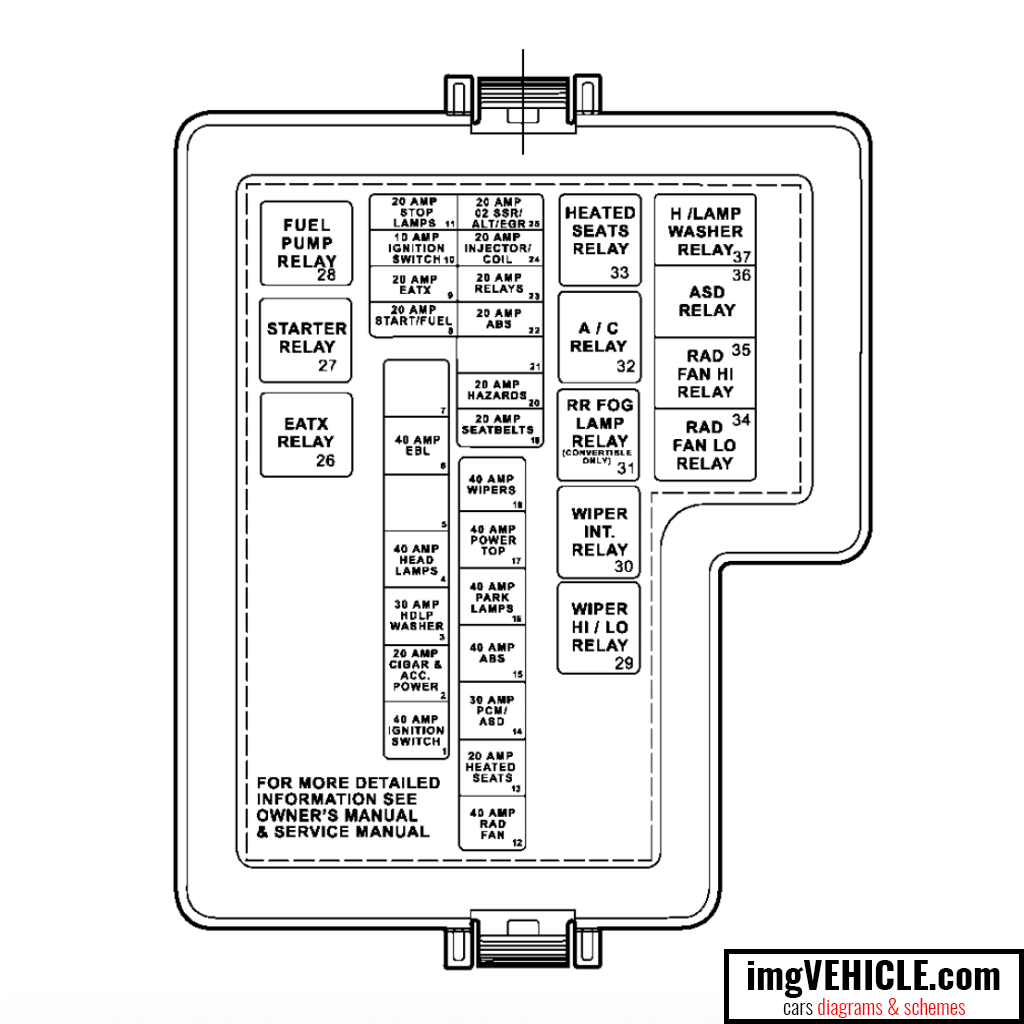 The fuse access panel is behind the end cover at the left side of the instrument panel. To remove the panel, pull it out, as shown. The identity of each fuse is indicated on the backside of the cover.