This is the third generation of Dodge Ram that was launched in 2001 at the Chicago Auto Show. The production of these muscular beauties started in 2003. There are subsequent models such as 1500, 2500, and 3000 2ghich are introduced in 2002 and 2003. There are several updates in these vehicles such as powertrains, suspension, interiors, new frames, etc.

There are some upgrades in different models throughout the year of production. The consecutive year-wise changes are quite adequate, and it helped the Dodge to gain massive popularity. In the Dodge Ram 1500 Quad Cab, there is a feature that has a 6.25-foot (2 m) cargo box and 22 inches of cab space. It has a seating arrangement that is equipped with rear recliners. Apart from this it also has a full-screen mapping in-dash navigation system with redesigned headlamps.

This third-generation also introduced a pair of chassis cab models known as 4500 and 5500. These come under class-4 and class 5 trucks with a significant weight of 7,484 kg and 8,845 kg. These all upgrades are introduced in the model which was launched in 2007. The models built after 2007 have engine capacity that provides power up to 350hp. Apart from these, there are different special editions such as Hemi Sport which is a quad- core variant of rumble bee. It was introduced in 2004. Dodge ram VTS concept car was also presented with Viper GTS like mirrors, 17-inch wheels, dual white stripes, and a V10 engine that is capable of providing 415bhp of power.

If you are looking for a commercial purpose pick-up truck with all the features and a performance-centric approach, then this is an ideal alternative. For those who want to acquire a machine with maximum power and a spacious cabin, then opting this will provide maximum value for money. 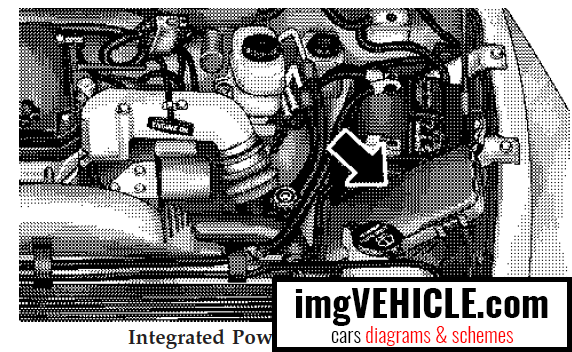 When installing the Integrated Power Module cover, it is important to ensure the cover is properly positioned and fully latched. Failure to do so may allow water to get into the Integrated Power Module, and possibly result in a electrical system failure.
All Dodge Ram III (DR/DH/D1/DC/DM) info & diagrams provided on this site are provided for general information purpose only. Actual Dodge Ram III (DR/DH/D1/DC/DM) (2002-2009) diagrams & schemes (fuse box diagrams & layouts, location diagrams, wiring diagrams etc.) may vary depend on the model version.
Comments (0):