When talking about luxury cars, you simply cannot miss out on Porsche from the list. It is one of the best luxury car brands in the world. Porsche is a German automobile manufacturing company that specialises in high- performance SUVs, sports cars, and sedans. The company was founded 89 years ago in 1931 by Ferdinand Porsche. Today, it has emerged as one of the top international automobile companies in the world. They have their headquarters based in Stuttgart, Baden-Wuttemberg, Germany. Porsche has a wide range of cars. One of the most popular ones is the Porsche Panamera.

Porsche Panamera I is the first generation model from the Panamera series. It was first manufactured in 2009. After that, the production was stopped in 2016. Porsche Panamera I is a mid-size luxury vehicle manufactured by the company. This is a front-engined car and features a rear-wheel-drive layout. It also has all-wheel-drive versions. This model made its first public appearance in the 13th Auto Shanghai International Automobile Show in China in 2009. In 2013, the model received a facelift which was again revealed in Shanghai, China.

Porsche Panamera I is designed for everyday use. It was equipped with a 4.8 liter twin- turbo 500 PS engine. The company launched two other models in this range in 2010. Given the fact that it was a luxury sports car, it was loaded with advanced features like adaptive air suspension, active anti-roll bars, Porsche active suspension management, and Porsche dynamic chassis control. Porsche Panamera I was an ideal car for people who are into both sports and luxury cars. The medium size of the car made it perfect for everyday use. Porsche Panamera I is the perfect combination of good looks and performance. It’s only been 4 years that the company has stopped its production. However, you can still spot a lot of them on the roads. 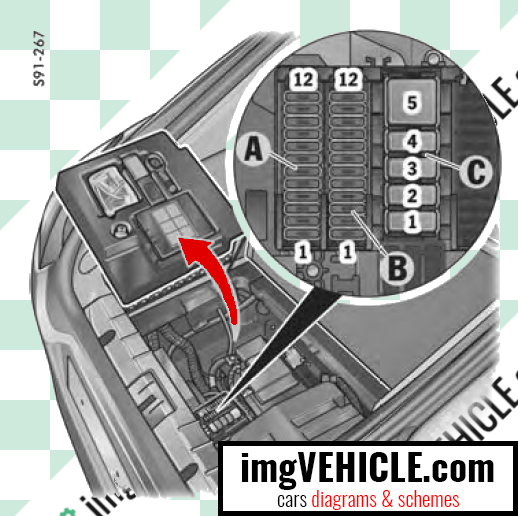 The fuse box and relay box is located in the engine compartment and in the left and right side of the dashboard.

Fuse box in the left side of the dashboard

Fuse box in right side of dashboard

Fuse and relay carriers in the luggage compartment