Impala is a model of car from Chevrolet that gained its name due to its class apart features. The availability of a spacious interior with a cushioned seating arrangement makes it apt for the long-distance commute. This is among the best ones in the large car class that has massive boot space. With the four-cylinder engine, one can get an optimal fuel economy.

This ninth generation of Impala was launched in 2016 with some of the technology-based upgrades such as Apple car play and wireless charging. In 2016 it was the best choice in the large sedan class. Due to these factors, it was termed as the 2016 best large car for families and the best large car for the money. The maximum cabin space with a refined interior makes it quite attractive. One can easily get a comfortable ride with great safety scores.  Apart from these, there are several other class apart features that help this car to earn the top spot. the safety concerns are minimised due to the high score in different tests. The low average pricing was considered as a value for money sedan.

Apart from all of these Chevy Impala has gained excellent crash test scores that make it as per safety guidelines. The NHTSA provided a perfect 5-star rating to this car. In addition to these, it also has some of the class apart safety features such as rear parking sensors, lane departure warnings, a rearview camera, forward collision warning, and many more. 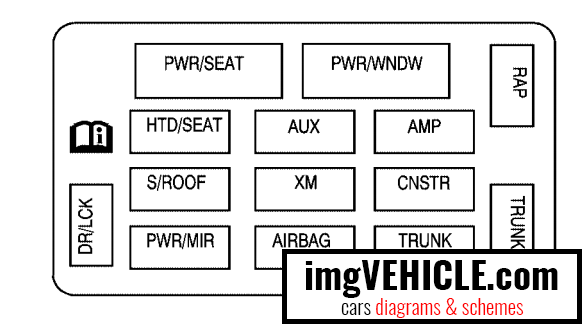 The fuse block is located on the passenger side of the vehicle in the carpet molding. Remove the fuse block door to access the fuses.

The underhood fuse block is located in the engine compartment

Notice: Spilling liquid on any electrical components on the vehicle may damage it. Always keep the covers on any electrical component.
All Chevrolet Impala IX info & diagrams provided on this site are provided for general information purpose only. Actual Chevrolet Impala IX (2006-2016) diagrams & schemes (fuse box diagrams & layouts, location diagrams, wiring diagrams etc.) may vary depend on the model version.
Comments (1):