Chevrolet is one of the best car brands out there. It was established in the year 1911. The company has a reputation for manufacturing comfortable and high-performance cars and other vehicles. Most people would prefer Chevrolet when buying family cars. This American automotive company is a division of General Motors. They have a wide range of vehicles to choose from. But the one we are talking about is Chevrolet Aveo I which is a sub-compact car.

Chevrolet Aveo I is a first-generation sub-compact car that was first introduced in 2002. It was manufactured by the company for a long time before they ended the production in 2011.

Chevrolet Aveo I was first marketed in 2002 in around 120 countries under seven different brands including Chevrolet, Holden, Pontiac, Daewoo, Suzuki, and Ravon. Chevrolet Aveo I was based on a then-new T200 platform. It was first revealed at the 2000 Paris Motor Show. Later, the car was displayed in many other car shows. It took three years for the car to be developed because of financial issues. But finally, it was launched in 2002.

The Aveo I comprises more than one model each of which comes with different features. The T200 is a sedan and five-door hatchback model. The interiors feature a circular motif throughout.

In 2005, the company introduced a facelifted sedan at Auto Shanghai 2005. The company made a lot of changes both on the exterior and interior. They also included a radio antenna into the rear glass. Along with that they also added an extensive wind tunnel that reduced the coefficient of drag from 0.348 to 0.326. Chevrolet Aveo I is a smooth car that was designed for comfort. It featured an attractive design and only got better with each revision made by the company. 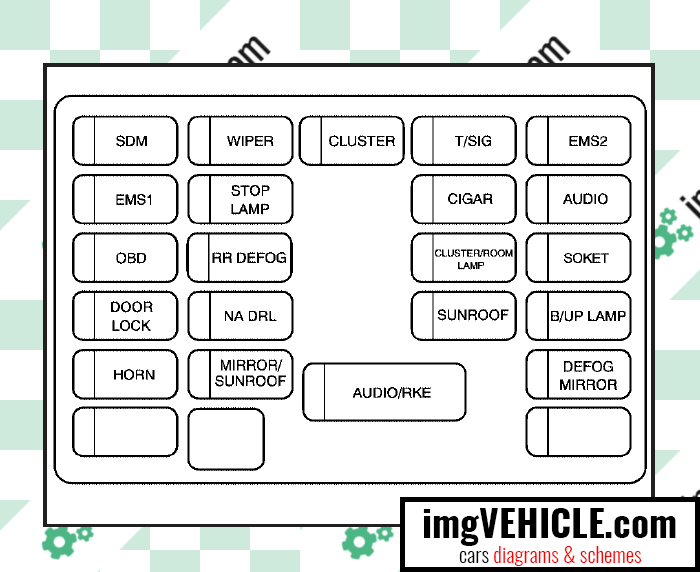 To access the fuses, open the fuse panel door by pulling the door out.

To reinstall the door, first insert the rear edge of the fuse panel door, then push the front of the door into the end of the instrument panel to secure it.

The engine compartment fuse block is located on the driver side of the vehicle, near the battery. See Engine Compartment Overview on page 5-14 for more information on location.

To access the fuses, press in the side flaps to release the cover. To reinstall the cover, push the cover until it is secure.